All about your Fluz network

Written by Amador
Updated over a week ago

Building and growing your Fluz network allows you to maximize your earnings and rewards. This article will help you learn more about the Fluz network.

How are rewards distributed throughout the network?

The distribution of rewards through the Fluz network follows a specific pattern. The reward distribution is the unique selling point of our app and is what will fuel the explosive growth of users, plus allow our members to earn such a sizable amount of rewards. Unlike other cash back apps where there is just 1 person making money, with Fluz the payout is split between 3 different buckets.

One of those 15 people will also be the inviter, bringing the total amount earned for him up to $1.49. 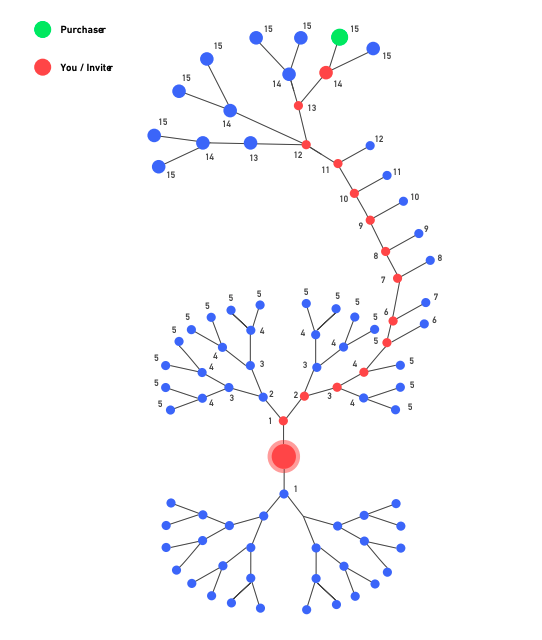 As you can see in the above diagram, the green Fluz member is the one that made a purchase, and the red Fluz members all have a direct connection with them, meaning they are in the reward path. The largest red dot in the center is the member that invited the green Fluz member, and they share the network reward as well as the special invite rewards, so it pays—literally—to entice everyone in your network to join.

The split profit system may not seem like it could earn you a lot of money, but even if you collect just 1 cent per user in one month, that’s over $650 of pure effortless passive income with a full network.

How can I get people to fill the available spots in my network?

The personal network connected to your seat in the Fluz app can have a total of 65,534 individual associations, each one providing cash back right into your digital wallet. That is a huge number, and rightfully many may be wondering how they could ever fill so many spots…in fact, it will be much easier to obtain a full network than imagined.

There are 2 ways to add members to your personal network:

Auto-fill is the most simplistic and least effective way to add connections. Fluz will be a big influencer to the overall network. When we post advertisements about the benefits of using our app, large influxes of people will download and register without invite codes. These people will be placed evenly throughout the global cash back structure. All seats that have existed before the newly joined Fluzzers register have the chance to be awarded that new member into their network. The current autofill algorithm will work layer by layer, and will fairly and evenly distribute new members into the preceding layer until it is full, then will move on to the next layer.

The second and much more effective method of filling your network will be through inviting. All members will receive personalized invite codes through the Fluz app, and will be able to directly influence people to join their specific network. The invite links can be sent through various digital methods such as Facebook, SMS message, email, etc.

Both of these methods will also have the additional benefit of “indirect influencing.” This means that if a person that was auto-filled or directly invited, starts inviting on their own accord, any people that they invite will also join your network as well. This indirect influencing can work up to 15 layers away, and will be the engine that powers the exponential growth of the reward structure.

What is the difference between someone I invite, and someone in my network?

With the unique Fluz cash back model, a portion of all cash back rewards earned through the app is shared. The distribution of the shared network rewards follows a specific pattern, and are separated into 2 distinct categories:

Simply put, rewards for members that have made a direct invite are a larger part of the total distributed cash back. This acts as compensation to the person who made the invite, as they have made an unmistakable impact on the growth of the platform. This larger sized reward lasts for as long as the invited member stays in the network and keeps purchasing.

Someone who is simply in your network through the invite of someone else or auto-fill, will award you the standard cash back split when they make a purchase.

The increase in reward size between a person you invited and a person you did not invite is 6x larger, so it really pays off to spread the word.

If two seats have the same network size, will they generate the same amount of money?

In theory, two seats with the same network size would generate equal amounts of revenue. However, it is important to note that this will not always be the case. Several variables can exist between two seats with similarly sized networks, which could result in one seat performing better than the other.

As cash back rates differ across merchants, it could be that the users in Network A earn more cash back even if they have the same average spend as those in Network B. Higher cash back percentages will mean higher rewards to both the user making the purchase, and subsequently, a bigger reward pool for distribution throughout the network.

These metrics are not static. The amount your personal network spends each month and the type of rewards they activate will likely fluctuate.

Will my exact place in the global cash back network always stay the same?

Fluz will require that all accounts show activity in the form of purchases. The minimum requirement to maintain your position in the network is 1 purchase made through the app every year. If you maintain this single annual purchase of any dollar amount, then you can be sure that you will always keep your current position and the network connected to your Fluz seat.

Highly active members will see that they occasionally move closer to the core of the global network structure. This positive movement will show an immediate increase in the number of people in your personal network and in theory increase the monthly earnings of your seat as well.

For every layer of the network, there will be two members that will have the potential to move closer to the core. The network mobility rules dictating which member moves up will use specific metrics to determine which of the two members are the most active; such as the highest dollar amount spent within the last month, most invites successfully initiated, and other important factors.

On the other hand, if you make no purchases within a 12 month period, then the network mobility rules will kick into effect, and you will be dropped to the outer edge of the network structure. This will result in the loss of your personal network, and if you wish to start using the app again to earn passive income, you will need to re-grow your network and maintain an active account status.

What happens when someone tries to “game” the network?

If a member tries to game the network and take advantage of the passive income generated by it, Fluz will swiftly locate and delete the accounts of these members, and any funds held on them will be forfeited.

The below list of actions will result in the immediate locking of an account, and can be amended at any time. Fluz actively monitors and tracks the following:

Fluz also reserves the right to lock accounts for other activity not outlined in this article, if we deem that it is harmful to the ecosystem or other members.

Did this answer your question?